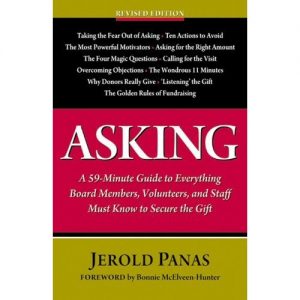 It ranks right up there with public speaking. Nearly all of us fear it. And yet it is critical to our success. Asking for money. Now comes a book, Asking: A 59-Minute Guide to Everything Board Members, Staff and Volunteers Must Know to Secure the Gift. And short of a medical elixir, it’s the next best thing for emboldening you, your board members and volunteers to ask with skill, finesse and powerful results. Jerold Panas, who as a staff person, board member and volunteer has secured gifts ranging from $50 to $50 million, understands the art of asking perhaps better than anyone in America. He has harnessed all of his knowledge and experience and produced what has become America’s bestselling book on the subject. Complements Fund Raising Realities Every Board Member Must Face, by David Lansdowne.

„ASKING is full of gems. No better blueprint for those of us embarking on the adventure of asking.“ — Jerold Katz, Headmaster, The Park School

„Jerry Panas writing on asking is like Michael Jordan writing on shot-making or Warren Buffet on investing.“ — Kenneth Gladish, National Executive Director, YMCA of the USA

„May become the Bible of fundraising. Another masterpiece by the master of modern philanthropy.“ —George Miller, President and CEO, United Methodist Higher Education Foundation